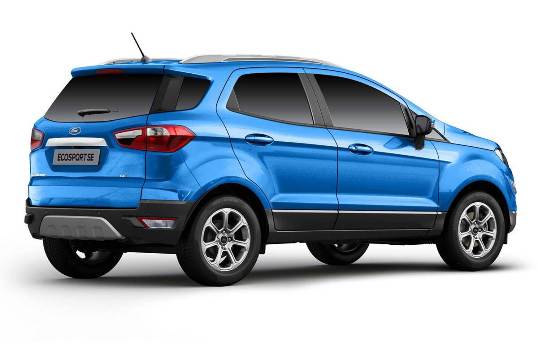 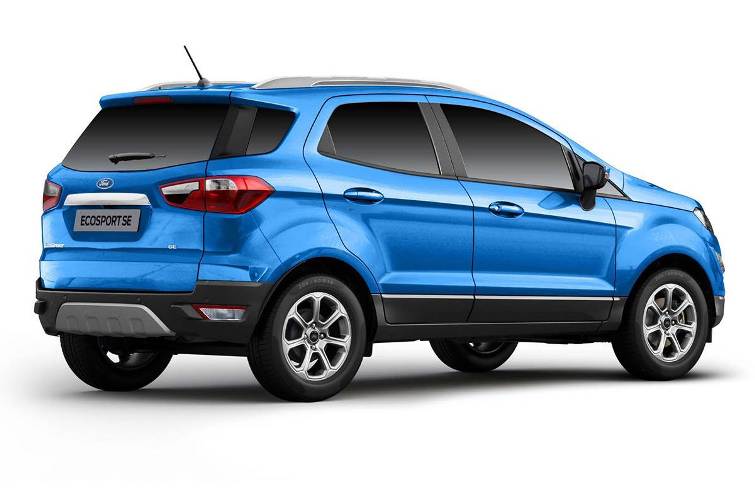 “Customers increasingly follow global benchmarks in design and look for things that are unique and distinctive, just like the new EcoSport SE,” said Vinay Raina, executive director, Marketing, Sales & Service at Ford India. “The SE carries forward EcoSport’s fun to drive credentials as well as its rich legacy of outstanding safety and best-in-segment technologies like SYNC 3.”

Apart from an elegantly designed tailgate and a new, dual-tone rear bumper that sports a silver applique, the SE variant retains EcoSport’s butch, robust appeal with a bold grille, 16-inch alloys and high ground clearance that enhance its SUV credentials.

Ford EcoSport SE comes with an easy to use puncture kit that will enable owners to repair tyre damage within minutes, without the hassle of removing the tyre from its slot. The new EcoSport SE is being offered with Ford’s trusted 1.5LTiVCT petrol engine that delivers segment-best 122 PS of power & 149 Nm of torque. Those who prefer diesel can choose the EcoSport SE paired to Ford’s performance-leading 1.5L TDCidisel engine, delivering a peak power of 100 PS and peak torque of 215 Nm. Both the engines will be paired to Ford’s responsive and agile five-speed manual gearbox.

Adding to its list of accomplishments, Ford EcoSport was rated among the least expensive to maintain in its compact UV segment, by Autocar India in its 2020 Maintenance Report. In the report, Ford EcoSport maintenance cost remained among the lowest in the segment in duration of five-year ownership cycle.

"Booking Open for the most sought after compact SUV Ford EcoSport 2021 make at 2020 price."

G.O. Automobiles Pvt. Ltd. (GO FORD), an authorized dealer for Ford vehicles in Nepal, has open BOOKINGS for Fresh 2021 make Ford EcoSport. Since its launch in 2013 and a major update in 2017 (introduction of Dragon Series Engine), Ford EcoSport has been the game-changer in compact SUV segment delivering Powerful performance, versatility, capability, rugged styling and sophisticated technologies for customers in Nepal. It has been continuously redefining the segment with new features and technologies. Due to the confidence of customers in Ford EcoSport, the model is sold out for the year 2020 and Booking has been opened for Fresh 2021 make vehicles at the 2020 price. However, this offer will be available for a limited period only.

The 2021 EcoSport offers Ford’s latest three-cylinder 1.5-liter Ti-VCT petrol engine that delivers segment-best 122 PS of power & 149 Nm of torque. The petrol engine will continue to be paired with both five-speed manual transmission and six-speed automatic transmission.

The line-up will also include a BSVI compliant 1.5l TDCi diesel engine that delivers best-in-class 100 PS power and 215 Nm of Torque. The diesel engine is available with five-speed manual transmission.

Strengthening its value for money credentials, the 2021 Ford EcoSport lineup will offer a standard 3-year or 100,000 KM factory warranty.

The EcoSport will carry forward its bold, imposing stance with aggressive exterior & interior styling. The compact SUV also offers a sun-roof on half of its variants.

The 2021 Ford EcoSport offers unmatched safety, connectivity & convenience with:
•    Up to six airbags for enhanced protection for the driver and as well as passengers
•    Best-in-segment  infotainment system, with the 8-inch touchscreen as well as Apple CarPlay and Android Auto compatibility on top-of-the-line EcoSport variant
•    A 9-inch touchscreen-based, infotainment system & embedded navigation on most variants
•    Unmatched convenience with driver assistance features like automatic HID headlamps, daytime running lights, electrochromic mirror, rain-sensing wipers, push-button start, and scores of other intuitive features 2021 In each edition, Ford EcoSport now comes with more features

In every edition of Ford EcoSport, 2021 updates a range of features. This feature now comes with half the EcoSport variant line-up. The SUV now has an improved networking feature in the Titanium trim.

The 2021 Ford EcoSport is now equipped with a titanium trim sunroof, increased accessibility, lower operating costs, and an improved warranty for a sunroof in titanium rim. Half of this function now comes in the EcoSport variable line-up. Ford EcoSport has always been pleased with its enthusiastic driving characteristics but it may have started to appear slightly date with the new series of sub-compact SUVs. In order to deliver more value now, Ford has integrated existing features in each edition of EcoSport in order to offer prospective customers a more value-added offer. The inclusion of the sunroof on the Titanium Trim is noteworthy among the changes. With that, half of the EcoSport variants now have the immensely popular feature. The company also notes that a range of updates will be received shortly in the Titanium+ edition. EcoSport includes features such as an automatic headlight, mirror, sunscreen, sensing lamps for rain, and a maximum of 6 airbags. The EcoSport has automatic headlights. The S variant gets an 8-inch touch screen that is compatible with Android Auto and Apple CarPlay. In addition, most versions get a 9" touchscreen infotainment header.

Changes in the exterior or interior design cannot be seen in the SUV substantially. It comes with up to six airbags, standard 8" touchscreen systems, and a 9" infotainment system in several variations that offer maximum safety for occupants. Furthermore, driver assistance features, such as automotive headlamps and electrochromic mirrors, rain-sensing wipers, etc.

JAPAN TO BID FAREWELL TO NEW PETROL CARS BY 2030S, FOCUSES ON HYBRID AND EVS