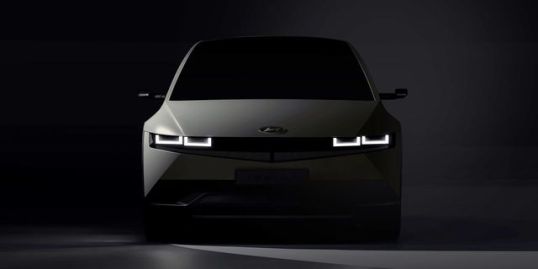 "The IONIQ 5 will be the first vehicle to be combined with the Electric-Global Modular Platform (E-GMP) of Hyundai Motor Group."

A teaser for the IONIQ 5, the first all-electric model in its IONIQ dedicated BEV lineup brand to debut at a virtual world premiere event in February, was released by Hyundai Motor on Wednesday.

The IONIQ 5 will be the first vehicle to be combined with the Electric-Global Modular Platform (E-GMP) of Hyundai Motor Group, a revolutionary device made specifically for electric battery vehicles of the next decade. The IONIQ 5 midsize crossover vehicle comes with a battery that allows 80 percent power to travel over 500 kms on a single charge and ultra-fast charging within 18 minutes.

The signature design elements of IONIQ 5 include Parametric Pixels, the smallest digital imaging unit, as well as its environmentally friendly Colour Material Finish (CMF) path that combines the analog with digital emotions, illustrating the timeless design importance of the IONIQ brand.

The front end of IONIQ 5 is decorated with arrays of pixel-inspired lights that suggest the digital technology inside.

The electric car is also the first Hyundai car to feature a clamshell hood that covers the entire width of the vehicle, eliminating panel gaps and providing an overall look that is clean and high-tech.

TWO NEW BRANDS ARE PREPARING TO START SELLING THEIR PRODUCTS IN NEPALI MARKET.