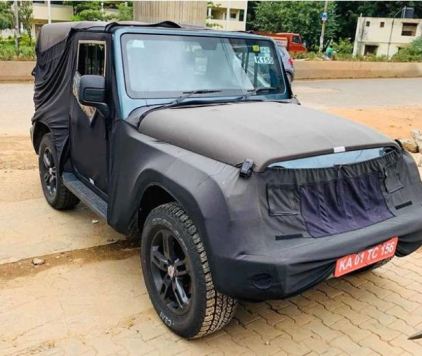 "The new generation Mahindra Thar SUV will be officially unveiled on August 15, 2020."

The new generation Mahindra Thar SUV will be officially unveiled in India on August 15, 2020. The SUV has been spotted again ahead of its debut. Mahindra & Mahindra is all set to unveil the new generation Thar off-roader SUV in India this week. The SUV will make its debut on August 15, 2020. The new-generation Mahindra Thar will come with an option of petrol and diesel engines. The petrol mill is expected to be a 2.0-litre turbo-petrol mStallion unit whereas the oil burner is likely to be a 2.2-litre turbocharged motor. Transmission duties will be carried out by a six-speed manual gearbox as standard along with an optional automatic unit. KIA SPORTAGE REVIEW : AN ELEPHANT OF AN SUV The fuel tank capacity of the car is 42 liters and the mileage provided by it is 20.0 kmpl.

Click here to compare Mahindra XUV 300 with other cars