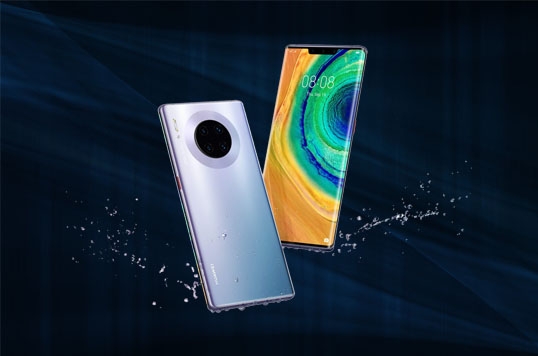 "Huawei started the trend of square camera cutout with the Mate 20 which all other big manufacturers coping but this year Huawei changed its design to a circular camera cutout inspired from the professional Camera lenses of Leica."

Huawei has been facing troubles from the US for a while now but is still going strong. A couple of months ago Huawei launched its flagship Mate 30 Pro with no Google mobile services (GMS) but still running on Android for now due to the ongoing US-Huawei battle.

Fast forward a few months, Huawei successfully sold over 7 million units of Mate 30 Pro in China and some Asia Pacific markets while facing US conflicts. Now, this awesome phone has arrived in the Nepali Market. During a press meet held in Kathmandu, Huawei launched the Huawei Mate 30 Pro for the Nepali market.

Huawei Mate 30 Pro was launched in September during the Huawei Product Launch Event Autumn 2019. its been a couple of months and assume it is safe that many of you already know or at least have heard about this phone. If you haven't let dive into the nitty-gritty of the phone. Starting with the design of the phone, Huawei started the trend of square camera cutout with the Mate 20 which all other big manufacturers coping but this year Huawei changed its design to a circular camera cutout inspired from the professional Camera lenses of Leica which Huawei has named the Halo Ring Design.

Not only the camera cutout, but the design of the phones are also inspired by the Leica cameras. The phones have no sharp corners for the ease of handling the phone and the back of the phone features a Gorilla Glass 6. The Huawei Mate 30 Pro features an all-new display named Horizon display, which is a curved display coming at 88 degrees which is more than Note 10 Pro. The panel is a 6.53” Flex OLED with the resolution of 2400x1176 and aspect ratio of 18.4:9. The display also features additional technology like 25% less harmful blue light, true edge-to-edge border-less display. In the front taking care of selfies are 32 MP, f/2.0, 26mm (wide) and a 3D TOF camera, both front and rear camera supports HDR and panorama shots.

Cine ultra-wide lens used in the phone allows you to take great videos even in a low-light environment not only that it lets users capture ultra-slow-motion videos in wait for it 7680fps. Other feature includes ultra-wide-angle timelapse videos in which 3D ToF sensor adds dynamic bokeh effects in real-time.