"TVS NTORQ 125 scooter is powered by a 124.8 cc single-cylinder fuel-injected motor that is capable of churning out 9.1 bhp of power and 10.5 Nm of peak torque."

TVS Motor has launched the BS 6 version of its NTORQ 125 scooter in Nepal. R Dilip, President – International Business at TVS Motor Company, said, "With the transition to BS 6, we have taken this opportunity to introduce two Fi Technology platforms. TVS NTORQ 125 is the only scooter to be equipped with an RT-Fi platform. The superior performance will be complemented by better real throttle feel."

The engine comes with a CVT gearbox unit.

The key features of the scooter include the TVS SmartXonnect system and a Bluetooth-enabled meter console which can be paired to the TVS Connect mobile App.

The SmartXonnect app offers a bunch of first-in-segment features such as navigation assist, top speed recorder, in-built lap-timer, and much more.

Price and variants in Nepal

The Race Edition (including BS-VI Fi) is available in Red-Black and Yellow-Black, while SuperSquad Edition comes in Combat Blue, Invincible Red, and Stealth Black.

The NTORQ is one of the most popular offerings from the Indian two-wheeler manufacturer in the 125 cc segment, and it recently completed one lakh sales globally. "The 2020 TVS Apache’s most prominent difference is the distinctive-looking headlamp."

The 2020 BS-VI-TVS Apache’s most prominent difference is the distinctive-looking headlamp. It is sharper than the previous unit in terms of design and now features full-LED lighting along with LED DRLs. However, the tail lamp and turn indicators continue to be conventionally lit.

There isn’t any change to the Apache’s bodywork. It continues to get a muscular and sculpted fuel tank, split seat setup and dual-barrel exhaust. Nevertheless, it does get a new set of graphics that feature on the headlamp unit and on the fuel tank. TVS is offering the 2020 Apache RTR 200 4V in two paint schemes- Gloss Black with red highlights, Pearl White and Matte Blue.

The new TVS Apache RTR 200 4V motorcycle comes with three ride modes, Sport, Urban, and Rain. The Sport Mode allows for maximum power and sharp acceleration while riding on the highway. The Urban Mode allows delivering optimum power and control for the city whereas Rain Mode comes with ABS tuned to deliver maximum response helps the rider gain better traction and control over the bike. 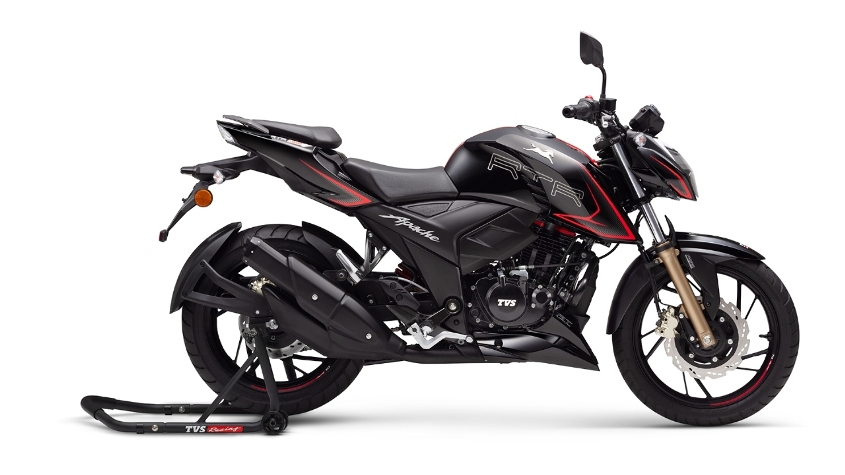 TVS Apache RTR 200 4V gets a 197.75cc, 4-valve, oil-cooled engine with patented Race Derived O3C, that churns out max power of 20.5 PS at 9000 RPM. The engine is mated to a 5-speed super-slick gearbox that offers a precise and powerful riding experience.

The mileage provided by the bike is 50.7 kmpl as per ARAI.

As for competition, the 2020 TVS Apache RTR 200 4V’s biggest rival is the Bajaj Pulsar 200NS in the country. Jagdamba Motors Pvt. Ltd. is the sole authorized distributor of TVS Motor Company in Nepal In 2018, TVS Ntorq 125 was launched as the first Bluetooth-connected smart scooter in Nepal and has been able to establish as Nepal’s First Smart Sporty Scooter.

Over the years, the brand has become synonymous with industry-first technology, unrivaled style, and superior performance in select international markets.

After a year, in 2019 it became the fastest growing scooter in Nepal. In 2020, the Ntorq 125 Race Edition became the largest selling premium scooter in the Nepalese market in its 125-cc category.

As per the customer demand sole authorized distributor of TVS, Jagdamba Motors Private Limited is going to introduce TVS NTORQ Race Edition with better than FI technology in the Nepalese market through virtual launch from the Jagdamba Motors Official Facebook Page on 25th July 2021, 5 PM onwards.