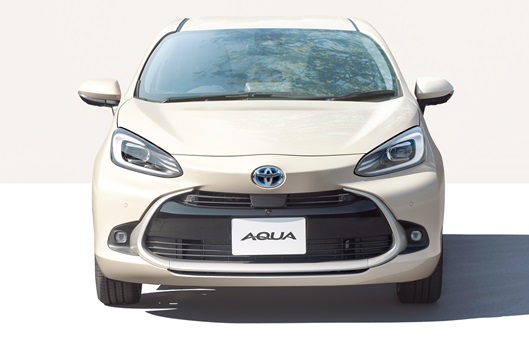 "Aqua hybrid is equipped with a nickel-hydrogen battery system that has twice as much power output as the previous model, enabling longer travel on electricity without the use of conventional fuel."

Toyota has launched its new hybrid compact Aqua with enhanced acceleration performance and about a 20 percent improved fuel efficiency in the first full-model change in 10 years.

The new Aqua sits on the TNGA's GA-B platform and is powered by an in-line 3-cylinder DOHC 1.5-litre M15A-FXE dynamic force engine. It is capable of generating a maximum output of 91PS and a peak torque of 120 Nm. This engine is combined with a THS II hybrid system with a reduction mechanism. Aqua hybrid is equipped with a nickel-hydrogen battery system that has twice as much power output as the previous model, enabling longer travel on electricity without the use of conventional fuel.

Toyota has reduced the number of parts used for the nickel-hydrogen battery to increase its capacity. The latest model claims to return a mileage of nearly 35.8 kmpl when driven on petrol.

The Aqua comes with a full range of carefully considered equipment, including as standard on all grades a 100-volt (alternating current)/1,500-watt accessory power outlet and an emergency power supply mode that allows electricity to be drawn from the vehicle for external use during blackouts. The extension of this wheelbase means more space for luggage and passengers at the rear seats.

One of the major features of the new Aqua is the parking assist system that only requires the driver to press a button to park, the first time it has been installed in a non-luxury Toyota car. Toyota had launched the first Aqua hybrid in the aftermath of the major earthquake and tsunami that hit northeastern Japan in March 2011.

The Aqua, which was first introduced as an HEV-only model and became a best-selling car due to its fuel efficiency and usability, has sold more than 1.87 million units since its launch. United Traders Syndicate Pvt. Ltd., the sole distributor for Toyota in Nepal, has commenced the sales and distribution of Toyota Corolla Cross in Nepal. Toyota vehicles are one of the most preferred Japanese vehicles in Nepal. This new SUV edition of the world-renowned Toyota nameplate Corolla is produced in Thailand. Interior looks very familiar with the Corolla hatchback. There's a large touchscreen at the dashboard, and a digital gage cluster. Toyota says that the Corolla Cross High offers ample interior space for up to five passengers. The front grill on the outside of the car gives it an elegant look. The accent lines on the entire body of the car made it more distinct. Corolla Cross has one of the longest wheelbases that ensures stability at high speeds and a more comfortable ride.

The Corolla Cross comes with MacPherson strut front suspension, torsion-beam rear suspension, disc brakes at all four corners, and is available with 17- and 18-inch wheels wrapped in 215/60 and 225/50 rubber respectively.

As for safety items, seven airbags come as standard and the Toyota Safety Sense suite is available.

The Corolla Cross will get a 1.8-liter petrol engine that makes 140 hp and 175 Nm of torque. This car has a CVT transmission that makes this SUV faster, and also makes this vehicle light. This engine drives the front wheels through a CVT.

This vehicle is built in the 4-cylinder TGNA platform, which supports its advanced design, stability, and overall performance.

FORD TO GO ALL ELECTRIC IN EUROPE BY 2030

TESLA TO SET UP ELECTRIC CAR MANUFACTURING UNIT IN INDIA 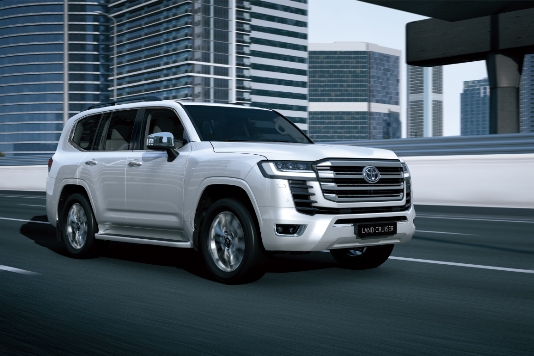 Toyota revealed the latest generation of its flagship luxury off-road SUV during a global online premier Wednesday. The 300 Series Land Cruiser aims to merge new technologies and construction methods with the legendary on- and off-road performance we've come to expect over the nameplate's 70-year history. At first glance, the new Land Cruiser has a blocky, solid look. There are distinct differences to the previous model, notably around the light positions and bumper shape, but Toyota has kept the length, width and wheelbase the same as the previous model. The SUV's frame was redesigned to reduce weight and increase rigidity. In fact, the car is 200kg lighter than its most recent predecessor. It also has a lowered centre of gravity, which should improve handling and, in particular, cornering capabilities. Improvements have been made to the suspension, with the adoption of something Toyota refers to as an E-KDSS. The new model now has a multi-terrain monitor, which instantly displays obstacles as viewed from the driver's viewpoint.

Power comes from a twin-turbocharged V6, of course, with 3.5-litre petrol and 3.3-litre diesel versions available. These will produce 410 and 305 horsepower, respectively.

No price has been announced yet, but the Land Cruiser will be available all over the world. In this 70th anniversary year of the Land Cruiser, Toyota has completely redesigned its character by merging technologies accumulated over many years with the latest technologies, and is planning to launch it all over the world starting in the summer of 2021.

A cumulative total of approximately 10.4 million units and more than 300,000 units a year have been sold in 170 countries and regions all over the world.