"Ford Motor Co and BMW AG are leading a $130 million funding round in Solid Power, a solid-state battery startup, as carmakers work to reduce the cost of electric vehicles by investing in the development of affordable but powerful rechargeable batteries"

Ford Motor Co and BMW AG are leading a $130 million funding round in Solid Power, a solid-state battery startup, as carmakers work to reduce the cost of electric vehicles by investing in the development of affordable but powerful rechargeable batteries, the companies announced on Monday. According to BMW battery cell technology chief Peter Lamp, the Series B investment round, which includes venture capital firm Volta Energy Technologies, allows Solid Power to expand in-house manufacturing capabilities and positions the battery maker to eventually supply future EVs, possibly by the end of the decade. Solid Power declined to say how much the company is worth as a result of the funding round.

"The partnerships and the capital that comes with it are really going to put us on a good footing to execute on our road map, which is simply qualifying this technology for vehicle use and getting them into vehicles in the not-too-distant future," Solid Power Chief Executive and co-founder Doug Campbell said in an interview.

Automobile manufacturers are racing to develop EVs in response to tightening CO2 emission standards in Europe and China.

Solid-state battery technology consists of a high-capacity energy storage device that outperforms lithium-ion batteries by replacing the liquid or gel-form electrolyte with a solid, conductive material. Among other advantages, the new technology provides higher energy density and improved safety due to the absence of flammable components. According to Solid Power, its technology can provide 50% more energy density than current lithium-ion batteries.

Solid-state battery technology, on the other hand, is more expensive than lithium-ion cell technology. It must also demonstrate its ability to operate and last in the real world, as well as expand its scale to meet industry demand.

Ford and Volta Energy announced their second investment in Solid Power on Monday. In 2018, both companies took part in a $26 million Series A round that also included Hyundai Motor Co and Samsung Electronics.

"We've worked with over a dozen different startups in this space, and we've been very impressed with the progress that Solid Power has made," said Hau Thai-Tang, Ford's chief product platform, and operations officer.

Solid Power, based near Denver, raised $5 million in convertible debt earlier this year from BMW iVentures. It began working with the German automaker in 2016.

According to Campbell, the latest investments will result in Ford and BMW owning equal, unidentified stakes in Solid Power, which was founded in 2012 as a spinoff from the University of Colorado Boulder.

Ford is aiming to electrify key models in its lineup, including the Transit van later this year and the F-150 pickup in mid-2022, and it already sells the all-electric Mustang Mach-E SUV. It previously stated that it will invest $22 billion in electrification between now and 2025. 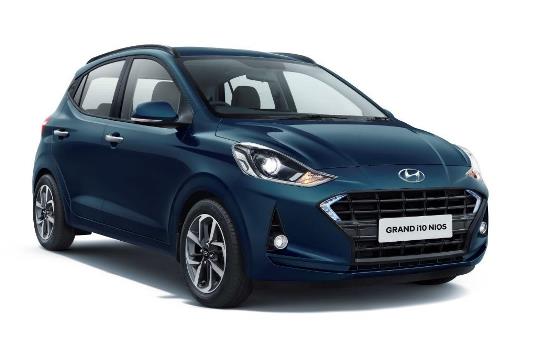 "Grand i10 NIOS is one of the best travel companions."

Laxmi Intercontinental P. Ltd., the sole authorized distributor for Hyundai Automobiles in Nepal has launched one of the most eagerly awaited cars, the HYUNDAI Grand i10 NIOS. Hyundai Grand i10 is one of the most loved cars and appreciated by the audience for many years. Now, to carry its legacy forward, Hyundai has brought the Grand i10 NIOS which has stylish looks and advanced features that will satisfy the needs of the customers. The car will win the hearts of Nepalese customers with its extremely rich offerings. Having made to outperform expectations, Grand i10 NIOS will be available in 1.2L Petrol Engine Kappa Dual VTVT Technology with Max Power 83ps/6000rpm engine in both Manual and Automatic transmission options. Grand i10 NIOS offers the availability of 5-Speed Manual and Smart Auto AMT. Grand i10 NIOS is one of the best travel companions. To upgrade your smart traveling experience, Grand i10 NIOS comes with the features like Apple CarPlay, Android auto, and best-in-segment Touchscreen Infotainment System (8 inches). The Grand i10 NIOS also provides wide and spacious cabin and rear AC Vents to ensure comfortable trips. The price of the car starts at NRS 31,56,000 for the Magna variant, whereas both Magna AMT and Sportz manual variant will be available at NRS 34,56,000. Grand i10 NIOS will be competing with  Maruti Suzuki Swift, Ford Figo, and Renault Triber.

Laxmi Intercontinental P. Ltd. has a pan Nepal presence through 13 Showrooms and 17 Service Centers. Hyundai is among the 5 largest automobile manufacturers in the world and manufactures superior quality vehicles trusted by millions all over the world. From BMW to Toyota : How are big carmakers approaching the EV transition?

To say that it has been a busy week for electric vehicle (EV) news would be an understatement.

On Monday, Jaguar Land Rover (JLR) announced a new business strategy headlined by a commitment to stop producing petrol and diesel vehicles under its Jaguar brand by 2025 and switch to electric-only models. Given that Jaguar only produces one pure-electric model at present and outsources production, the commitment marks a major shift for the firm.

New plans for Land Rover, meanwhile, will see the brand stop producing ICE vehicles for sale in the UK by 2030, in line with the Government’s ban on new petrol and diesel cars. Global production will then stop by 2036.

Then, on Wednesday, Ford announced plans to only sell pure electric passenger cars in Europe from 2030. It will stop selling pure petrol and pure diesel by 2026, then work to phase out hybrids.

The news from Ford came on the same day that The Climate Group provided the second annual progress update on its EV100 initiative. The report revealed that 101 businesses have joined the commitment and that this cohort has rolled out 169,000 EVs to date, with more than half having hit the road in 2020. But it also highlighted a number of challenges around business EV integration, including concerns around charging infrastructure and a lack of suitable models – particularly in the heavy goods vehicle space.

With all of this in mind, edie looks at the commitments that some of the world’s biggest carmakers have made on transitioning their portfolios to EVs – from A to Z. Summer 2020 saw BMW unveiling a new climate plan, including a commitment to cut emissions from vehicle use by one-third by the end of the decade. Ferrari is launching a new hybrid, the SF90 Stradale, in late 2021, after debuting its first hybrid in 2013.

But plans for Ferrari’s first pure electric vehicle are yet to be confirmed. Former chief executive Sergio Marchionne teased plans shortly before his death and current boss Louis Camilleri has continued to do so.

In an exclusive interview with Jalopnik late last year, Camilleri said the brand would not commit to full electrification within his lifetime. As mentioned in the introduction to this piece, Ford will only sell pure electric vehicles in Europe from 2030. Globally, it is expecting for pure EVs to account for two-thirds of sales by this point.

Ford has earmarked at least $22bn of investment, to be allocated through to 2025, to achieve this business model transition. GM made headlines last month with a commitment to become carbon neutral in operations and products by 2040. The business owns Buick, Cadillac, Chevrolet, GMC and Wuling.

Emissions from products accounted for 75% of GM’s absolute carbon footprint in 2019. So, to meet the new long-term target, the firm is planning to offer will offer 30 all-electric models globally by 2030. It has been eyeing a fully electric portfolio since 2017.

GM has forecast that EVs will account for 40% of market entries in its largest market – the US – by the end of 2025. Suzuki does not yet offer any fully electric models and has not outlined a timeline for its plans to do so. Around one-fifth of the Japanese multinational’s annual sales are accounted for by hybrids. Building on this trend, it recently updated its hybrid Swift and Ignis models. Tesla is the largest publicly traded automotive company in the world. It goes without saying that it only produces pure electric vehicles. Co-founder Martin Eberhard argued in 2006 that hybrids are “no more electric than a 1942 Jeep” and has maintained that stance.

For all its work to avoid in-use emissions, however, Tesla has been criticised for its wider environmental disclosures. The company scored badly in the World Benchmarking Alliance’s most recent auto industry index and it has only been producing sustainability reports since 2019.

In 2015, Toyota unveiled a series of ambitious new environmental targets with an overall aim to eliminate the use of gasoline cars and cut average carbon emissions from all of its vehicles and products by more than 90% by 2050.

However, its EV plans hit a new challenge in 2020. The business had been planning to showcase new electric taxis, minibuses and buses at the Olympic Games in Tokyo, but the event was postponed due to Covid-19 and there are still uncertainties as to whether it will go ahead this year.

WITH ITS BOLD IONIQ 5 EV A Speculative Rendering of the Next-Generation Ford Ecosport

The Ford EcoSport was first introduced in India in 2013, and it is the brand's best-selling model in India. The small Ford SUV is due for a comprehensive update, which will most likely take the form of a new-generation model. According to reports, the next-generation EcoSport is already in the works (under the internal codename BX744). There is currently no official information about the next-generation EcoSport, but that hasn't stopped digital artists from imagining the upcoming SUV! Kleber Silva created this design with inspiration from the Ford Equator and Ford Evos, the latter of which was recently unveiled at the 2021 Shanghai Motor Show. The SUV's front end features a pair of vertically split headlamps, with J-shaped LED DRLs on top and the main LED headlamps below on the front bumper. The front grille appears to be quite large, with 3D chrome elements and a chrome bar at the top. A silver-finished faux bash plate is also installed at the bottom of the front bumper.

Although the alloy wheels are different, the side profile appears to be largely similar to the current-generation model. The vehicle also has roof rails and a sunroof, as does the current model. At the back, we notice a completely new taillight design inspired by the Ford Equator. The rear bumper features a faux bash plate in silver finish, as well as an integrated dual exhaust. Unlike the EcoSport SE, this digitally created model does not have a tailgate-mounted spare wheel. The interior design has not been shown here, but it is safe to assume that the next-generation model will have a completely redesigned interior. The current model's cabin has now been completely outdone.

The current model's cabin is now completely outdated and in desperate need of a complete overhaul.

The next-generation EcoSport is expected to have the same engine options as the current one (1.5L petrol and 1.5L turbo-diesel), with a few tweaks to increase power and/or fuel-efficiency. Previously, Ford planned to source engines from Mahindra & Mahindra for its SUVs, but those plans were scrapped after the two companies' partnership was completely dissolved.

PAPERLESS AND WITHOUT COLLATERAL “FONELOAN” IS A NEW BANKING INITIATIVE

MSI GE76 RAIDER WITH RTX 3070 IS NOW AVAILABLE IN NEPAL

TOYOTA HAS REGISTERED A TRADEMARK FOR THE BZ SERIES IN INDIA

HUAWEI WATCH GT 2 PRO HAS BEEN RELEASED IN NEPAL