Nissan Magnite teased ahead of official reveal on October 21

"Nissan India has teased the Magnite subcompact SUV which is set to be officially revealed later this week on October 21."

Nissan India has teased the Magnite subcompact SUV which is set to be officially revealed later this week on October 21. The Japanese automaker has also released a new teaser video of the SUV which gives a speak-peak at some of the key details of the upcoming sub-4 metre SUV.

The Magnite will come based on the CMF-A+ platform which also underpins the Renault Triber MPV in India. It is going to be the second product to get this architecture. The company has already revealed the concept images of its new SUV and the production version of the new Magnite is expected to retain most of the design elements borrowed from the concept.

The upcoming Magnite SUV sports a crossover inspired stance. Some of the key design highlights include LED headlamps and LED daytime running lights, faux skid plates, bold looking alloys, roof rails, and two-tone exterior treatment. It will also get a tapering roofline towards the rear-end. As suggested by a spy image in the recent past, the Magnite will feature massive claddings around the wheel arches contributing to its muscular appeal.

At the rear, there will be sleek, sculpted tail lights protruding out of the body with reminiscing outlines of the Triber's lights. Also, a wide 'Magnite' lettering will be seen centrally placed on the tailgate.

The Magnite SUV will likely feature the same 1.0-litre Energy petrol engine that's also found on the Renault Triber. This engine has been tuned to deliver 71 bhp of maximum power and 96 Nm of peak torque. The transmission options may include a 5-speed manual as well as an optional AMT unit. Also, the company may launch the turbocharged version of the engine which was displayed at the 2020 Auto Expo. "The upcoming 2020 Nissan Kicks compact SUV is likely to be offered in four variants and over 50 NissanConnect features."

Nissan will be launching the BS-VI version of Kicks in the Indian market soon. Recently, the company revealed that the compact SUV will come powered by a 1.3-litre four-cylinder turbocharged petrol engine. The forthcoming BS6 Kicks SUV was expected to be launched in March, which got delayed to the coronavirus outbreak across the world. However, the company hasn't confirmed any official launch date yet. Now, a newly leaked document has surfaced online revealing variant details of the upcoming 2020 Nissan Kicks BS6.

According to the newly leaked documents, the 2020 Nissan Kicks BS6 will be offered in four variants - XL, XV, XV Premium and XV Premium (O). The document not only revealed variant details about the SUV but also hinted the features that would be offered on each one of them. The SUV will be loaded with over 50 NissanConnect features including rear air-conditioning vents, cooled glove box with illumination, electrically adjustable ORVMs, dual front airbags, ABS with EBD and brake assist. Design and aesthetics of the SUV will be similar to the outgoing model. It will continue to feature dual-tone colour scheme underlined by a cascading grille, LED projector headlamps, silver-coloured skid plate, front fog lamps, roof rails, 17-inch alloy wheels and much more. On the inside, the SUV will sport dual-tone interior with carbon fibre finish along with an 8-inch touchscreen infotainment head-unit with smartphone connectivity and voice recognition, rearview camera. The Nissan Kicks BS6 SUV will be seen in two petrol engine options - 1.5-L and 1.3-L Turbo. Both the engines will be mated to a manual gearbox as standard whereas a continuously variable transmission (CVT) is likely to be offered as an option on the turbo petrol engine only. The new turbo petrol and naturally aspirated unit are claimed to return fuel economy of 16.3 kmpl and 14.1 kmpl respectively. The Nissan Ariya, the company's first all-electric SUV, will be able to drive up to 600 Kilometers on a single charge and features a high-tech interior, with no buttons or knobs, according to the Nissan.

The vehicle was unveiled during an online event Wednesday.

Nissan becomes one of the first major car companies to offer an all-electric car when it introduced the Leaf in 2010.

CEO Makoto Uchida and Chief Operating Officer Ashwani Gupta unveiled the Ariya to a global audience during a live-streamed event at the new Nissan Pavilion in Yokohama. “The Nissan Ariya is a truly beautiful and remarkable car,” Gupta said. “It enables you to go further, easier, and in comfort. The Ariya is designed to impress, and to express what Nissan strives for – making our customers’ lives better.” Powerful performance for a wide range of needs Nissan’s designers took advantage of the car’s new EV platform, which allows for a flat floor, and its compact climate control components to give the Ariya the most spacious cabin in its class. The lounge-like interior, featuring Zero Gravity seats, provides a welcoming and comfortable environment for drivers and passengers alike. Click Here to Compare Nissan Cars with any other car "A plug-in version of the Nissan NV van."

The Nissan Ariya, the company's first all-electric SUV, will be able to drive up to 300 miles on a single charge and features a high-tech interior, with almost no buttons or knobs, according to the automaker.

The vehicle was unveiled during an online event Wednesday.

Nissan became one of the first major car companies to offer an all-electric car when it introduced the Leaf in 2010. At the time, Nissan had big plans to make a whole lineup of electric vehicles, which then-CEO Carlos Ghosn predicted would make up 10% of the global car market by 2020. So far, things haven't turned out the way. Last year, electric vehicles made up just 2.6% of all cars sold globally, according to the International Energy Agency. Besides a new and improved Leaf, the only other electric vehicle Nissan offers widely is the eNV, a plug-in version of the Nissan NV van, which isn't sold in the U.S. Nissan executives have said the company will come out with eight new electric vehicles by 2022. 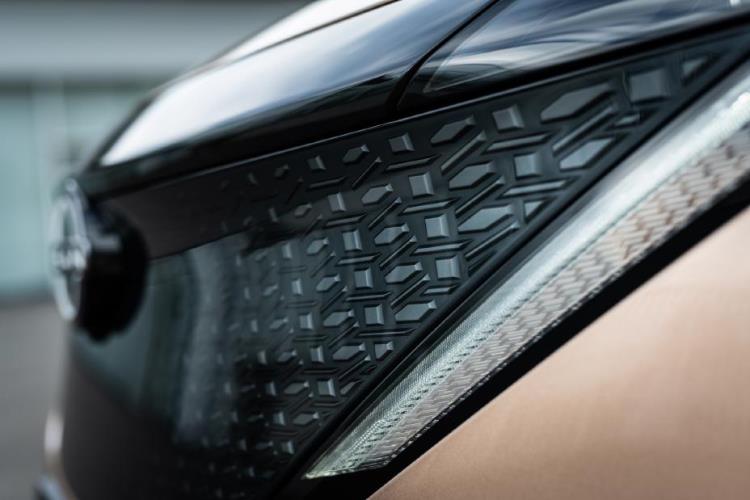 The Ariya crossover SUV will become Nissan's second electric vehicle available in the US. It's bigger and roomier than the Leaf, a compact car, and has a design somewhat like Nissan's Murano SUV. The most noticeable difference is the front "grille" design. Electric cars don't require nearly as much incoming air as the gasoline-powered cars, so the front grille is purely a design feature. The Ariya's grille has a large sunken area with a subtle pattern that's supposed to resemble a traditional Japanese Kumiko design. It also has a slightly redesigned Nissan logo that lights up. Inside, the Ariya has a particularly roomy interior thanks to the lack of an engine under the hood. Things that usually impinge on interior space, like the air conditioning equipment, are located under the hood instead.

In place of buttons and switches, most so-called secondary controls -- for things like climate control and the stereo -- are handled through "capacitive haptic switches,touch-sensitive icons that light up on the dashboard." The Ariya's large flat battery pack is mounted under the SUV's floor, which allows the vehicle to have a completely flat floor, an arrangement also found in a number of other electric models including the Tesla Model Y.

The electric SUV will be available in front- or all-wheel-drive and with a choice of two battery pack sizes. The base model will have a 63-kilowatt-hour battery pack. With the larger 87 kilowatt-hour pack, the Ariya will be able to go about 300 miles on a charge based on US EPA tests, according to Nissan. Nissan did not release a range estimate for the SUV with the smaller battery pack. The Ariya will be able to go from a stop to 60 miles an hour in about 5 seconds, Nissan chief operating officer Ashwani Gupta said in an online meeting with journalists. That performance is similar to Nissan's 370Z sports car.

The Ariya will go on sale in Japan in the middle of 2021 and the United States later next year. Prices in the US will start at about $40,000. That's a few thousand dollars less than competitors like the Ford Mustang Mach-E or the Tesla Model Y.