"This is the third smartphone in the series with Redmi Note 9 and Redmi Note 9 Pro already introduced earlier this year."

Xiaomi, a global technology leader, today announced the latest addition to the ninth generation of their Redmi Note series smartphones in Nepal. This is the third smartphone Xiaomi Nepal's no 1 brand in the series with Redmi Note 9 and Redmi Note 9 Pro already introduced earlier this year. Aura Design, which was introduced with our Redmi Note 7 series sees a paradigm shift with Redmi Note 9 Pro Max. It features the improved ‘Aura Balance’ design. The 16.9cm(6.67) FHD+ DotDisplay with a 20:9 Cinematic Screen brings an immersive experience and the in-display camera on the front eliminates the notch making it Redmi’s largest ever display on a smartphone. The rear features a quad camera setup that sits snugly on the glass back and the square design enables consistent field-of-view across all the lenses enabling a lesser shift in focus while switching lenses.

Redmi Note 9 Pro Max also features the Z-axis linear vibration motor, becoming one of the only devices in the segment to feature it. Z-axis linear motor enables flagship-like haptic experience, with over 150 custom vibration patterns across the UI.

Redmi Note 9 Pro Max features a quad camera setup consisting of 64MP Samsung ISOCELL Bright GW1 sensor, an 8MP ultra-wide sensor with a 119° field of view, industry-leading 5MP macro sensor and a 2MP depth sensor. The front is adorned by a large 32MP sensor enabling high-quality photography, videography, and AI Face Unlock. Users can now shoot selfies in dark environments thanks to the front camera night mode for the first time in a Redmi smartphone. Redmi Note 9 Pro Max features tools for videography like Super Stabilization on the rear camera, on both the main and the wide-angle sensors. 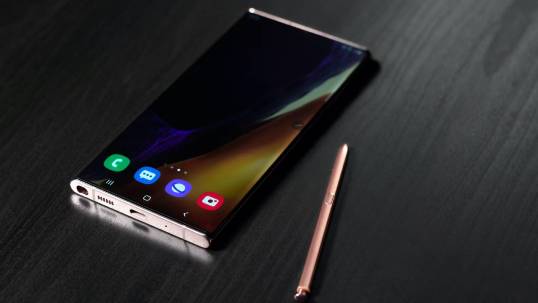 The 2020 generation brings improvements on all fronts, from software to hardware, to make the S Pen even better. The Galaxy Note20 Ultra is built on the S20 Ultra platform. It has the same screen, a 6.9” Dynamic AMOLED 2X panel with 1440p+ resolution and 120Hz refresh rate.

The S Pen and the supporting Wacom layer on the screen have been updated to achieve 9 ms latency. Samsung says that at this point the experience is very much like writing on paper. Notes you take can be converted to Microsoft Office formats and synced with your other devices via Samsung Notes.

The rear camera still features the large 108 MP main sensor. It produces 12 MP photos with binning, records 8K videos at 24 fps with a cinematic 21:9 aspect ratio (this ratio is also available for 1080p at 120 fps videos) The Note20 Ultra still boasts a periscope lens with 5x optical magnification as opposed to 4x. There is now a 12MP sensor sitting behind it, replacing the 48MP sensor of the S20 Ultra.

The chipset divide remains, with a partial upgrade. Much of the world will get the Snapdragon 865+ chipset, which is 10% faster than the 865 found inside the S20 phones.

The Note20 duo is the first phone with special optimizations baked into their software. There will be over 100 Xbox titles available in mid-September with the Xbox Game Pass Ultimate. The screen's 240 Hz touch sampling rate matches dedicated gaming phones.

The battery has been bumped up to 4,500 mAh, which is 200 mAh more than the Note10+ but 500 mAh less than the S20 Ultra. The phone is bundled with a 25 W charger, which is the fastest supported. The phone will be available in three colours at launch: Mystic Bronze, Mystic Black and Mystic White.

The Galaxy Note20 comes with a larger screen than its predecessor – 6.7”, up from 6.3” – making it only slightly smaller than the Ultra. However, it is a flat panel rather than a curved one. This is a 1080p+ panel with the old Gorilla Glass 5 (even the Note10 used GG6). Those aren't the only downgrades compared to the Ultra either. The one that hurts the most is the refresh rate, a standard 60 Hz.

The rear camera is lifted from the S20/S20+. The main 12MP sensor has large 1.8µm pixels, which features Dual Pixel autofocus and OIS. A 64MP sensor (1.0 µm) is used both as a telephoto camera (3x lossless zoom, 30x Space Zoom) and as an 8K video cam.